Bhagsu: A Delight for the Wandering Soul

There’s more to Bhagsu than what meets the eye. There are interesting places to explore in the vicinity, including an ancient temple. From roaring waterfalls to a spectacular view of the Dhauladhar Range of the Himalayas, Bhagsu, just 4 km from McLeodganj, is a treat for your soul.

Bhagsu gets its name from a mythological story dating back 5000 years. A king called Bhagsu once committed a grave error by stealing water from the sacred Nag Dal Lake. This angered the God of Snakes and a battle ensued. King Bhagsu was eventually defeated by the God of Snakes and was also forgiven for his crime. He later built the temple, Bhagsu Nag, to honour the God of Snakes. Today, this temple is a special place for the Gurkha community that has settled around Dharamshala.

The main attraction of Bhagsu is its waterfall. After passing through the street of souvenir shops, eateries, and a giant swimming pool, the view opens up to a valley covered in rocks, greenery, and prayer flags. The village is popular among Indians and foreigners alike and doubles up as a hippie and backpackers’ paradise.

Bhagsu is a favourite destination for avid travellers. One can spend endless days hiking, climbing, wandering, exploring, resting, picnicking, and gazing out over the horizon. 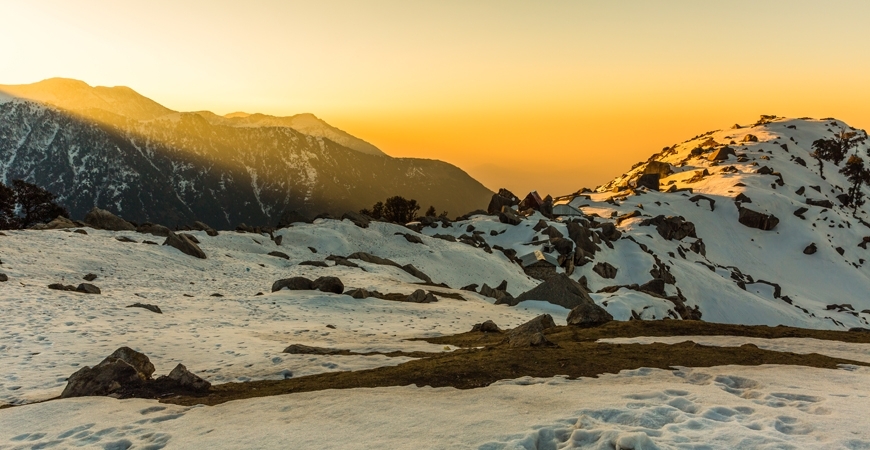 Triund Trek: For a Star-Studded Experience

Trek to this uncrowned jewel of Dharamshala, nestled between the Dhauladhar mountains and Kangra valley. Mcleodganj: A Melange of Cultures

The Dalai Lama calls it his home away from home. Break away from the mundane city life to experience the essence of Tibetan culture in this quaint hill town. Tantric Buddhism has many secret rituals that are passed on from the master to the disciple. The Gyuto Monastery is a place where this tradition is kept alive. Kangra Fort: Amongst the Oldest in India

It is one of the oldest forts of India. A king who fought with the Kauravas in the battle of Kurukshetra built this fort. A photographer's dream come true and a nature lover's paradise - explore the beauty of the Dal Lake.