Home to invaluable treasures including the bejeweled black hat meant for the Karmapa, Rumtek is one monastery in Sikkim you cannot miss. If you know anything at all about the 'Black Hat' sect of Buddhism, you would know that Rumtek, the largest monastery in Sikkim, is the seat of the Karmapa-in-exile.

If you don't, you will find the story of the Karmapa and the black hat in Rumtek fascinating. The 12th Karmapa built the original monastery in the mid-eighteenth century. It was an important monastery for Tibetan Buddhists and the home of the bejeweled black hat that has been worn by the Karmapas for over 600 years. This hat is believed to be other-worldly and woven from the hair of angels and the name, 'Black Hat' for this sect of Buddhism was hence derived.

The 16th Karmapa had to flee Tibet and he arrived in Sikkim carrying priceless manuscripts and relics. The Royal Family of Sikkim helped him rebuild Rumtek and made it the seat of the Karmapa-in-exile from persecution in Tibet. So it was under the 16th Karmapa that Rumtek regained its lost glory and became the repository of invaluable treasures again.

After the 16th Karmapa passed away, there have been two claimants of the hat, but it remains guarded. So when you visit this monastery, you still have the opportunity to get a glimpse of this coveted black hat. Gangtok : A journey of gastronomy

Gangtok - a melting pot of ethnic cultures that offers a delightful journey in gastronomy. The cable car ride between Deorali and Tashiling will show you the view of Gangtok from the mountains. There is a lot of history and folklore behind the Enchey Monastery, a significant religious centre in Gangtok. Hanuman Tok is a temple dedicated to Lord Hanuman. It is believed that he had rested here before proceeding to Lanka with the Drongiri Mountain. Namgyal Intitute of Tibetology: The Custodian of Tibetan Culture

The Namgyal Institute of Tibetology was built to preserve and nurture Tibetan culture and Buddhism. The institute's museum has a fascinating collection of cultural and religious artefacts, one of the largest outside Tibet. The Plant Conservatory in Gangtok is a place that will give you a glimpse of the variety of plants that grow in this region. With an endless list of flora, this place is like a museum of plants! Gangtok's Mall Road is where the town comes alive! Grab a coffee at a trendy bakery, browse through the books at a pop-up store, or simply watch life go by. Sikkim produces some of the rarest and best quality flowers in the country. Walking into the flower exhibition centre during the month of May is like taking a deep dive into a world of different colours and aromas. A tranquil, azure water body high up in the mountains of Gangtok, the Changu Lake is one place you have to see for yourself to believe that it exists! Paragliding in Gangtok: Take your adventure quotient to a new high!

Add a dash of adventure to your Holiday with Paragliding and get a Bird’s Eye view of Gangtok, literally! Don’t get frightened about its looks, this gentle beast moving at a slow pace is the best way to cover this terrain and experience the beauty of Gangtok. Located at an astonishing height, bordering Tibet, this pass is a must see for the views of ice-capped mountains and verdant valleys. 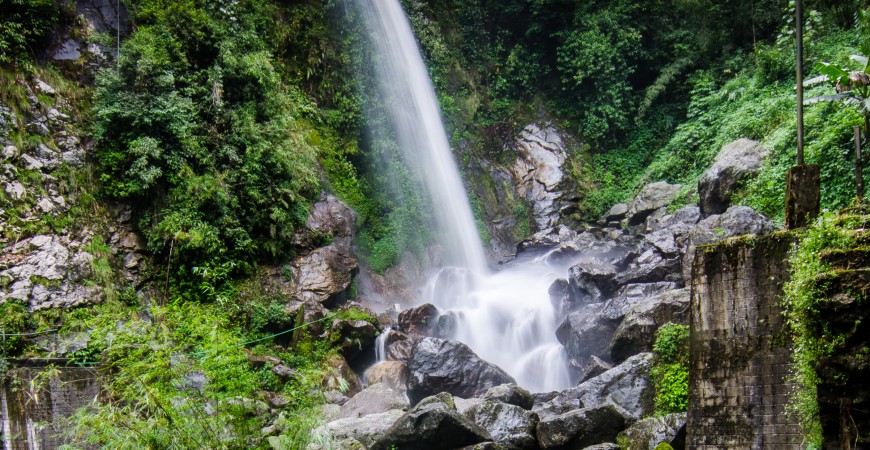 Seven Sister Waterfalls: The falls that make your Jaw drop.

The waterfall that, in a way, represents the Seven Sister States of the North East – is a jaw dropping sight to be seen! Take a moment to witness the picturesque view of Kanchenjunga, the expanse of Gangtok, and the breathtaking beauty of the snow capped mountains from Ganesh Tok. Situated at an altitude of 6500m, the temple is known for making the wishes of devotees come true. Explore this splendor of the tiny temple and surrounding scenery.